Starting from Keenetic OS version 2.15 we added a function of Wi-Fi System controller and simple, lego-like inclusion of Keenetic devices into a centrally controlled Wi-Fi System.

These features are adding up a lot to previously released seamless roaming when wireless devices can quickly switch between several Keenetic devices. The function is available for all current models with the KN-xxxx index from Start to Ultra, as well as for those previous generation Keenetics that have v.2.15 supported.

Suppose, there is single Keenetic working as a home router. You have a necessity to expand the area of Wi-Fi coverage, e.g., your house’s second floor or farther end of an office. Simply connect one or more new Keenetic devices to the initial one – the controller.

When you enable the component ‘Wi-Fi System Controller’ on your initial Keenetic all potential nodes of the modular Wi-Fi system will be automatically detected on its web interface (available from Keenetic OS version 2.14 or higher). 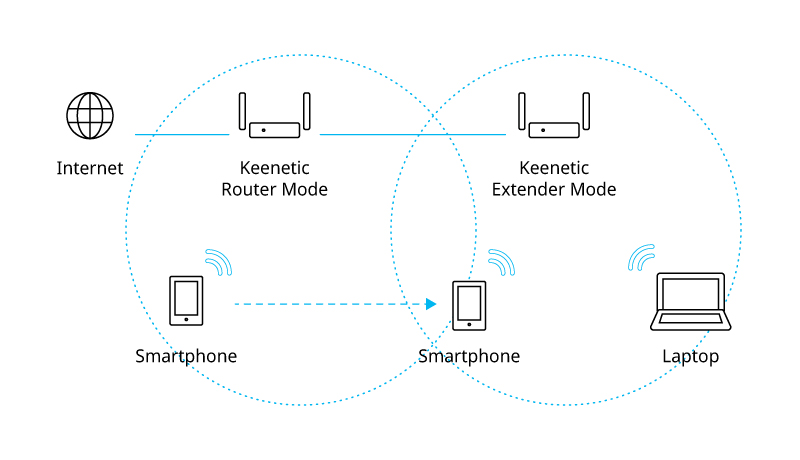 Capturing new Keenetics as nodes allows you to apply all existing settings throughout your home network. By changing the network name (SSID) or password on the controller you automatically change it on all subordinate Keenetic devices.

It’s pretty convenient to register all user devices on the controller too, to monitor their handover between the nodes of the Wi-Fi system, to check traffic consumption, to set speed limits and working schedule, to assign Internet access and content filtering profiles. The web interfaces of additional Keenetics can be skipped: they will be updated automatically as new functions and security patches are released.

First, define whether your Wi-Fi client devices do need a 5 GHz frequency and do you go for gigabit speeds for your wired devices at your home network. If so, we suggest one of gigabit models like Viva (KN-1910), Giga (KN-1010) or Ultra (KN-1810) for a Wi-Fi System controller, and Viva model for the extenders. It’s up to you whether you connect extenders to the controller using a ‘star’ network topology (e.g. from a switch cabinet) or as a ‘chain’.

For a remote office or a country house where Wi-Fi coverage needed for a significant area with relatively empty Wi-Fi frequency of 2.4GHz, Keenetic Lite (KN-1310) with amplifiers of a reception signal and hardware mode switch would be efficient. Our youngster Keenetic Start (KN-1110) can handle that as well.

In heavily populated areas like multi dwelling apartments, malls or business centers where 2.4 GHz frequency is fully occupied, dual-band models are the kings. If you build a 100Mbit network Keenetic Extra (KN-1710) will be ideal as a controller with a dual-band extender made of Keenetic Air (KN-1610).